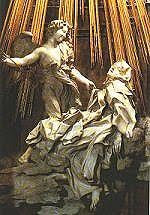 not to have been touched

by that stroke of fire,

not to have been consumed,

flame that does not burn,

nor to have been lifted

to those storied heavens

where the gods look down

What does it mean

To arrive when the journey

How would life have been

infused with the ordinary,

children crying in the night,

as if by doing again and again

On the chapel wall,

God stretches out his hand

ready to be born once more.

How did you greet

that angel who arrived?

How did you bear it,

that shock of light,

when god entered every cell?

Saint Teresa, who lived in the sixteenth century, was noted for her "raptures." Although no one can say for certain what these were, I believe she was experiencing what we today would call "Kundalini bliss," divine union through ecstatic states of awareness.

The sculptor Bernini did a famous piece showing Teresa of Avila in full ecstasy, her face transfigured in joy as the angel beside her pierces her heart with his lance. This is her moment of awakening, her transition into overwhelming bliss.

In many ways, her experience resembles that of those awakened by Kundalini, whose intensity at times threatens to overwhelm. Though we delight in this new found state of boundless love, some of us also may question from time to time if this is what we really want, for the blessing comes at a price. Teresa herself suffered recurrent illness during her transformation process.

Teresa's most famous book is called "The Interior Castle." It maps the stages of spiritual progress to God. I think that many 'K-ers" also live in an "interior castle," for we frequently find it difficult or impossible to share our inner happenings with others.