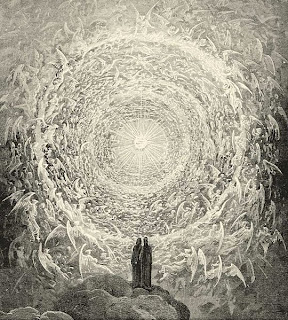 What Is Enlightenment?
The enlightenment moment occurs when we (the inner being) totally abdicate the awareness and concerns of the “local self” and merge “completely” with the larger universal consciousness. This union can be achieved only through the abandonment of ordinary thought processes, and entry into ecstatic awareness of being as such (bliss). In Eastern practices, this is accomplished through the release of the Kundalini energies, which travel upward through the system, opening the body to its fullest receptivity, and culminating in the embrace of shiva/shakti at the crown. Then, and then only, one knows one’s essence and source--divine, intoxicating, universal energy. At that moment, the rest is irrelevant.
For an instant, one transcends the polarities. One experiences in full the meaning of such terms as "Oneness," "Union," "Self, Consciousness, Bliss," "Transcendence," "Merger with the Infinite," The Lotus Opening." For the latter is exactly what the experience feels like. The energies, having arisen to the open crown, now pulse within the brain, exactly as though a many-petaled flower were unfolding in infinite bliss. All this occurs as ecstatic energies from the Divine Source stream into one' s very skull in an outpouring of unabated, indescribable, overwhelming Love.
This is indeed the moment when Enlightenment occurs. Now--in addition to the bliss--there is as well a major realization--one suddenly understands that only this ever flowing river of bliss/light is real. It alone exists. You--as a separate self--a discrete being or persona or ego--are a manufactured concept, having no innate reality in yourself. You are one tiny particle in this ongoing cosmic reality--you have no real importance, except as might a cell that functions within a physical body. This nothingness is who you are--only God (the Divine) is real, and God
(as Divine Reality) is infinite energy, infinite love. To some, this revelation is quite disturbing. It is not easy to make full surrender of the ego which jealously guards its own distinct identity.
Now, comes a choice: to remain “forever” in blissful union--to disdain the ordinary world with its struggles and disturbances and drown in this new found sea of bliss--or to return to the familiar world of the antimonies, with its conflicts and bitterness, its sufferings and confusions. To stay in ongoing union requires a great surrender of the local sense of self. Certain saints and holy beings are said to have attained this state. For most of us, the challenge is too daunting, and, having glimpsed paradise, we return to the world of the mundane, having experienced "the moment that changes everything" (Katherine Anne Porter's phrase).
Indeed, I feel that to choose to return to the "real world" is the only valid option in our time. One comes back to this world “in order to do one’s bit,” to aid the global/cosmic project of worldwide transformation one feels is in progress, to participate in the universal shift of consciousness so many describe. One thus hovers between the two worlds, in a difficult posture. One is now open to the cosmic forces--as energy, as delight, as ultimate being (for one returns many times to the original moment of awakening and drowns again and again in the ocean of divine bliss), but one also travels daily among the turbulence and agony of the “unawakened” world. There one is subject to constant buffeting and assault--and must struggle to maintain composure and equilibrium amidst the strife. Sometimes one almost envies the unawakened--those whose nerves and intellect are bounded and secure by their state of unknowing. But--in one’s heart of hearts--one knows one has chosen the right course--in fact one has made the only possible choice.
Now, I have never personally met what I would consider a totally "enlightened" being, that is, one who is fully evolved in both the spiritual and secular sense. To me, such a person would have even more to offer than a state of permanent bliss and dedication. These traits would characterize someone with a fully opened heart. Indeed, she would be enlightened in the usual sense of the term. But today's world needs as well someone with a fully developed intellect--someone knowledgeable about the currents of human history both East and West, one who comprehends at least the basics of modern science including quantum physics, a being who is aware of the complexities of the modern world and it social structures and myriad conflicts. That person needs to know more than "what my guru told me," even though the teacher may have imparted great fundamental wisdom. To be "enlightened" in this way requires more than flexibility in yoga asanas, ability to recite passages from sacred texts, and a kind demeanor. The fully enlightened spirit would (to my mind) also have a fully awakened brain, with both right (feeling) and left (reasoning) aspects highy developed.
I realize this is asking a lot. But a lot is required if we are to be held worthy of the term "enlightened." And, given our need for action in the world on the part of all who are able to focus their talents toward world salvation and betterment, especially in this time of global crisis, we need spiritual leaders to direct us by example. Indeed, I feel we have an overwhelming need for those willing to forego personal "enlightenment" and follow the bodhisattva path of working for the good of all in the world, rather than pursuing a solitary goal of personal spiritual attainment.
Our own immediate challenge is to do both--to live both in the world and out of it, to be open to infusions of divine love and to exercise our own talents in the world about us in the best way we can.
from "Unmasking the Rose," by Dorothy Walters
(image from Dante-- Angels in Dante's Paradiso)
# posted by Dorothy : 12/01/2010 03:39:00 PM