Kundalini, Enlightenment, and the Near Death Experience 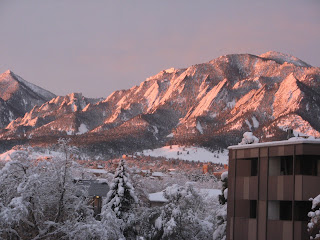 Kundalini, Enlightenment, and the Near Death Experience
Tonight I watched a T. V. program on the Biography channel focusing on the Near Death Experience. Three NDE survivors told their stories--one was Barbara Harris Whitfield, a friend who is also on the Board of the Kundalini Research Network. As many may know, a Near Death Experience is considered to be much like a Kundalini awakening, and the groups follow parallel paths in many ways.
I will not relate the individual stories here, other than to say that the three persons who described their experiences all left their bodies, and were judged clinically dead for many minutes, one for almost an hour. All told of the bliss and serenity they felt as they watched the medical teams labor below to resuscitate them, and of their reluctance to return to their physical bodies with its attendant pain and challenges.
Each one told of feeling as though they were enveloped in a vast field of love while they were no longer connected with their physical beings. They felt that this--their spirit body--was their real identity. When they “returned” (and recovered) they brought with them a new realization of the true values of their own lives. As Barbara put it, they knew that the truth lay “inside” (the life of the spirit)rather than “outside” (the world of “things” and mundane activities.) For each one, love became the supreme focus of their lives, and loving and receiving love the most important aspect of living.
It occurred to me after I watched this program, that what they learned is also the lesson of Enlightenment itself. The lesson is that reality (truth) in fact is a great field of energy whose tone and texture is love itself. To be enlightened in the ancient sense is to learn that one is merely a part of this great sea of love energy, and that loving others is the supreme reflection of this truth.
So--we do not have to sit in a cave and bring the energies up through the Sushumna in order to reach Enlightenment (though this is one method, for it culminates in union with divine love). Nor must we undergo a Near Death Experience to reach this state. There is another way and it is open to each of us every minute of our lives. It has nothing to do with religion or religious institutions as such. We need only to practice love, to offer and receive love, and know that we are all connected through love. As Ram Dass urges in the title of his latest book, “Be Love Now.”
Thus--we can each Be Love Now and Be Enlightened Now. It’s that simple.
Dorothy Walters
December 12, 2010
# posted by Dorothy : 12/13/2010 03:39:00 PM