St. John of the Cross––The Dark Night of the Soul 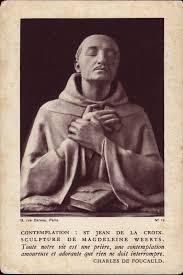 St. John of the Cross––The Dark Night of the Soul

(Songs of the soul delighted at having reached the high state of perfection, the union with God, by way of spiritual negation.)

On a darkened night,
Anxious, by love inflamed,
-- O happy chance! --
Unnoticed, I took flight,
My house at last at peace and quiet.

Safe, disguised by the night,
By the secret ladder I took flight,
-- O happy chance! --
Cloaked by darkness, I scaled the height,
My house at last at peace and quiet.

On that blessed night,
In secret, and seen by none,
None in sight,
I saw with no other guide or light,
But the one burning in my heart bright.

This guide, this light,
Brighter than the midday sun,
Led me to the waiting One
I knew so well -- my delight!
To a place with none in sight.

O night! O guide!
O night more loving than the dawn!
O night that joined
The lover with the Beloved;
Transformed, the lover into the Beloved drawn!

Upon my flowered breast,
For him alone kept fair,
There he slept,
There I caressed,
There the cedars gave us air.

I drank the turret's cool air,
Spreading playfully his hair.
And his hand, so serene,
Cut my throat. Drained
Of senses, I dropped unaware.

Lost to myself and yet remaining,
Inclined so only the Beloved I spy.
All has ceased, all rests,
Even my cares, even I;
Lost among the lilies, there I die.

Also available through Wordery Free shipping anywhere in the world

/ Photo by lepiaf.geo /
Marrow of Flame
Poems of the Spiritual Journey
by Dorothy Walters

"This re-issue of Dorothy Walters's mystical masterpiece is a great literary and spiritual event." -Andrew Harvey

I woke up this morning thinking about the great Spanish mystic, John of the Cross.

This poem is one of my favorites. It has a giddy sense of escape, a secret lover's tryst, yet it haunts us with its images of darkness and death. Let's contemplate a few of these themes...

Although mystics often experience the Divine as a radiant, all permeating light, sometimes God is described in terms of night or darkness.

On a darkened night...

Night is the great Mystery, the unknown. Darkness is the place of secrets. It is the time of sleep, rest, peace. We drop all of our activities and turn inward.

Because nighttime is associated with sleep and, by analogy, death, it can also represent the time when the ego sleeps and most easily can "die" or fade away. The ego is less in charge at night, less demanding that its every desire be instantly met. The busy mind is less active, more likely to be at rest.

Night is the time when lovers meet, when the soul meets its Divine Beloved.

Darkness, like God, envelops everything in its embrace. It is in the darkness of night that all things become one, losing their individuality as they disappear into that mystery. Nighttime is the time of nondual awareness, when dichotomies and artificial notions of separation fade.

John of the Cross is particularly known for speaking of "the dark night of the soul." This is not so much a reference to the experience of the Divine as mentioned above, but a preliminary state. Prior to experiences of union, the soul loses its orientation, where worldly distractions seem pointless, but the blissful fulfillment of divine union hasn't yet been experienced. This can be a period of confusion, being "anxious," a period of intense spiritual thirst, and a feeling of blindness that is the equivalent of trying to find one's way in the dark. But that too can be an important stage of the journey that indicates the nearness of the sacred goal, not its distance.

Yet in this "blessed night," John of the Cross discovers light. This is not just any light but an overpowering radiance, "Brighter than the midday sun."

For genuine mystics, light is not a mere concept or metaphor; it is directly experienced. This light is perceived as being a living radiance that permeates everything, everywhere, always. This light is immediately understood to be the true source of all things, the foundation on which the physicality of the material world is built.

The sense of boundaries and separation, long taken for granted by the mind as the fundamental nature of existence, suddenly seems illusory, for this light shines through all people and things. It has no edges, and the light of one is the light of another.

This light is recognized as one's own Self, while simultaneously being the Self of all others. Since this light is you and, at the same time, it radiates within all, the question arises: How can there be separation? conflict? loss?

This is how John proceeds so boldly from the experience of light to union, the sacred marriage, "Transformed, the lover into the Beloved drawn!"

And what about death? Why does he startle us by shifting from the ecstasy of union to death?

And his hand, so serene,
Cut my throat. Drained
Of senses, I dropped unaware.

Without understanding of this imagery, it can sound as if every mystic and saint has some strange death wish.

In deep ecstasy, the sense of individuality, the sense of "I" thins and can completely disappear. Though you may still walk and breathe and talk, there is no "you" performing these actions. The separate identity, the ego, disappears, to be replaced by a vast, borderless sense of Self. Suddenly, who you have always thought yourself to be vanishes and, in its place, stands a radiant being whose boundaries are no longer perceived in terms of flesh or space.

And why does he become "unaware" in this state? This profound sense of union, while being a state of supreme awareness, is sometimes ironically compared with blindness or non-awareness. The reason is that the mind has become so completely still that it no longer projects a conceptual overlay upon reality. A person is no longer seen as a person, a table is no longer seen as a table. Surfaces and categories -- the foundation of mundane perception -- become ephemeral, dreamlike, insubstantial. One stops witnessing the surface level of reality in the common sense, and this can be compared to blindness or non-awareness. Yet everything shines! Everything is perceived as a radiance with a living interpenetrating light. And the same light shines in everything.

This is why many mystics assert they no longer see the world and, instead, only see God. It is not that they bump into furniture when they walk across a room; perception on the mundane level doesn't stop (except in the most ecstatic states), but surfaces take on a thin or unreal quality; it only occupies a minimal level of the awareness. It is as if the world everyone always assumes to be the real world that populates normal awareness, the visible world, is actually a world of shadow, but underlying that is an unseen world of brilliance and indescribably beauty.

This is how one becomes "unaware" while being supremely aware.

Lost to myself and yet remaining,
Inclined so only the Beloved I spy.

It is this experience, this complete shedding of the limited ego and the transcendence of mundane awareness, that is the death so eagerly sought by mystics throughout time.

All has ceased, all rests,
Even my cares, even I;
Lost among the lilies, there I die.

John of the Cross was born Juan de Ypes in a village near Avila, Spain. His father died when he was young, and he was raised in poverty with his two brothers by his widowed mother.

In his early 20s, John entered the Carmelite order and moved to Salamanca to further his studies. Among his other teachers was the well-known mystic and poet Fray Luis de Leon.

Still in his 20s, the young John of the Cross first met the woman who would become his mentor, Teresa of Avila, who was in her 50s at the time. Teresa of Avila was a mystic, a writer, a social activist, and a founder of several monasteries. She had begun a reform movement within the Carmelite Order, advocating a return to simplicity and the essential spirituality that should be at the heart of any monastic order. John of the Cross joined her movement of Discalced Carmelites and quickly became a leading figure himself.

Members of the unreformed Carmelites felt threatened by the critique from this new movement, and they turned to force, imprisoning and even torturing John of the Cross. He was held in a tiny cell in Toledo for nine months, until he escaped.

As terrible as this experience must have been, it was during his time of imprisonment that John's spirituality and poetry began to blossom. The experience of losing everything, of being supremely vulnerable, seems to have brought John of the Cross to a profound state of openness and spiritual insight.

It was during his imprisonment that John began to write poetry.

Once he escaped from prison, John continued his work with Teresa of Avila, founding new monasteries and advocating for their spiritual reforms. He spent the rest of his life as a spiritual director among the Discalced Carmelites.

His two best known works, the Spiritual Canticle and Dark Night of the Soul, are considered masterpieces of Spanish poetry and esoteric Christianity. Besides these, he wrote many other short poems, along with extensive commentaries on the meaning of his poetry as they relate to the soul's experience of divine reality.

Have a beautiful day, and an adventurous night!