Brenda McMorrow––singer to the world


BRENDA MCMORROW––SINGER TO THE WORLD 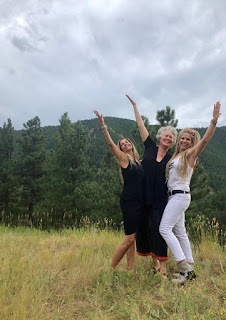 RECENTLY I HAD THE AMAZING LUCK TO MEET THREE OF THE MOST TALENTED AND LOVING WOMEN I MIGHT IMAGINE.  WE WENT FOR A SPECTACULAR RIDE IN THE MOUNTAINS AND ENDED UP EATING AT THE KATMANDU RESTAURENT IN THE TINY TOWN OF NEDERLAND, COLORADO, LOCATED AT THE VERY FOOT OF THE ROCKY MOUNTAINS.  SURPRISING AS IT MAY SEEM, THEY SERVE SOME OF THE BEST NEPALESE/INDIAN FOOD IN THIS PART OF THE COUNTRY.

BECAUSE EACH OF MY THREE NEW FRIENDS IS SO GIFTED, I WANT TO SET ASIDE A SPECIAL PAGE FOR EACH OF THEM, AND EXPLAIN MORE OF HOW I WAS SO HONORED TO HAVE THEM IN MY TERRITORY.

THE FIRST OF THE THREE I WISH TO DESCRIBE IS BRENDA MCMORROW, A VERY WELL KNOWN SINGER/COMPOSER WHO PERFORMS ALL OVER THIS COUNTRY AND ACROSS THE WORLD.  SHE IS PARTICULARLY KNOWN FOR HER RENDITIONS OF KIRTAN AND OTHER FOLK SONGS.  SHE IS ALSO,  I DISCOVERED, A MOST LOVING AND GENEROUS COMPANION, SOMEONE YOU FEEL HONORED TO KNOW.   I LOVE TO FOLLOW HER AND HER TRAVELS ON FACEBOOK, AND ENJOY HER AMAZING ADVENTURES ON HER FB PAGE.

SHE TALKS HERE OF TULSIDAS, AN EARLY INDIAN POET AND SAINT, STILL REVERED IN THAT COUNTRY.

HERE IS HER STORY:


In 2015 myself and my friend/percussionist Raffa Martinez took a trip to the Holy City of Varanasi (also known as Kashi or Benares) after leading a chanting and yoga retreat in Tamil Nadu. One day we decided to take our instruments and find a shady spot along the river Ganga to play some music. We walked along the river, all the while keeping an eye out for a shady spot. We saw a tattered, palm leaf umbrella and sat down to sing the Hanuman Chalisa (a devotional hymn to Lord Hanuman which was written by Tulsidas in the 15th Century). A large group soon formed around this unlikely Western duo singing a 40 verse hymn to a Hindu God! At one point during the song we saw a tall  woman descend the long stairs that led to ancient buildings which faced the Ganga. She was filming us and when we were done she said "What a beautiful thing you have decided to do: honouring Tulsidas by singing the Hanuman Chalisa directly at the foot of his home". Raffa and I were stunned because we, in fact, did not even know that Tusidas had lived in Varanasi, let alone in a direct line from where we were sitting singing a version of his hymn! The woman was shocked and delighted that we did not know and graciously took us for a tour to his house and the small museum beside it. She then told us that because of this great synchronicity she was going to arrange for us to be able to visit the holy Ram and Hanuman temple, Sankat Mochan, to sing the Chalisa there. (this is a temple that was built up around the spot where Tuslidas received Darshan from Ram!) Even though Westerners are not really known for playing music there, she was able to get us an invitation to play there! Here is the link to us playing the Chalisa there: https://www.youtube.com/watch?v=vUf5aMg2aLc
The next day our hotel manager asked if it was us that were at the temple the day before as he had just read an article in the newspaper about some westerners who had just played there. He read us the article in which the writer talked about there "not being a Chalisa of this kind ever played within the walls of the temple" and that one of the highlights was the "body language of the lady"! This made us laugh!

Thanks for your interest in this, Dorothy! It was a remarkable experience for me!

NOTE:  Brenda is the one in the middle in the picture above.  She has many songs on Youtube as well as manyCD's available.