Surprised by Bliss Once More 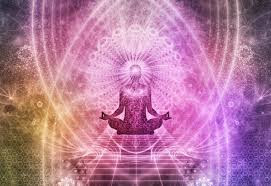 Surprised by Bliss Once More

A few days ago I went immediately to my computer after I got up, to see if there were any important messages from friends.  I soon noticed a simple stirring of energies in my hands and forearms and then this sensation became a sense of bliss in my hands and around my head.  I realized I was craving music and located some Ty Burhoe recordings on YouTube.

The bliss around my head continued as my hands took on more ecstatic vibration.  Sometimes they seemed to be carving sanskrit letters (as with om) in the air.  Eventually they moved closer to other chakras, such as the solar plexus, with arms stretching out as far as they could extend (the aura), the bliss stretching with them.

Sometimes I was able to send these sweet energies down to my feet, through intention.

Indeed, all of this was a real surprise.  Again, I was grateful to know that it is clearly possible to feel bliss while sitting in a chair when rapture arrives as a welcome morning visitor.

Kundalini never fails to impress with its own creative imagination.  It constantly comes up with new sensations, new delights.  It is sometimes like an unseen companion who wishes to play and instruct.  I love it.