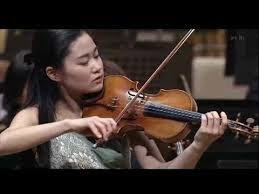 It was, of course, Tchaikovsky.
His great violin concerto.
Now played by a strong fist
in a child's body,
perhaps from China,
her almond eyes,
her hidden breasts.

I came upon it by chance,
and it was the sweet vibration
that captured me,
features now hard to recall, like
a love session
that was rapture,
but can't be remembered
in detail.

It began in the hands,
traveled upwards
and then awakened the crown,
opening to god's glory
flooding in
from elsewhere,
then down through each chakra
and bodily region,
ending in breath,
exaltation, supreme moment  of love.

How powerful she was,
years of practice
preparing for this moment,
this brilliant illumination,
she making love to her
instrument,
and that in turn
making love to me,
each fiber and corpuscle
quivering in bliss,
indefinable love potion.

They never told us
who she was,
nor spoke the name
of the violin
or the man with the baton.
But then it did not matter.

Another initiation
into mystery,
another transfiguration
into the beginning,
nada Brahma,
endless joy.

Note:  After further research, I found that the violinist was Sagka Shagi, a woman of Japanese descent who spent her childhood in Sienna, Italy.  She plays a Stradivarius.  The recording was with the Philharmonique de Radio France.